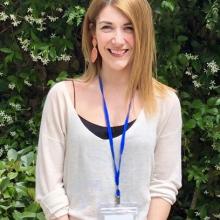 Margarita Markoviti is political scientist, currently post-doctoral researcher in the GOODGOD project: ‘How Europe defines the “good god” – The European Union strategies to advocate freedom of religion and belief and to counter radicalization’ at CEVIPOL. She is also research fellow at the European Research Council-funded project, ‘Grassrootsmobilise’, based at the Hellenic Foundation for European and Foreign Policy (Eliamep) in Athens and Visiting Assistant Professor of Comparative Politics at the IE University in Madrid.

Margarita received her PhD from the European Institute of the London School of Economics. She holds a double Master’s degree in Affaires Européennes from Sciences Po, Paris and from the LSE and a BA in History from King’s College London. She has taught European Politics and Institutions at the Government Department of the London School of Economics.

Markoviti, M. (2017), ‘The Intersection of State, Family and Church in Greece and Italy’. In Religion and Welfare in Europe: Gendered and Minority Perspectives, UK: Policy Press (with Lina Molokotos-Liederman).

Markoviti, M. (2017), The ECtHR as a Venue for Greco-Turkish Relations: The Treaty of Lausanne and the Muslim Minority in Western Thrace. Working Paper, ‘Grassrootsmobilise’: http://grassrootsmobilise.eu/the-ecthr-as-a-venue-for-greco-turkish-relations-the-treaty-of-lausanne-and-the-muslim-minority-in-western-thrace/

Markoviti, M. (2015), ‘Freedom of Speech, Religious Freedoms and Values (in which we do not even believe ourselves)’. In Christopoulos, D. (ed.), “Nothing is Sacred” or ‘That which cannot be said’?”, Athens: Vivliorama.