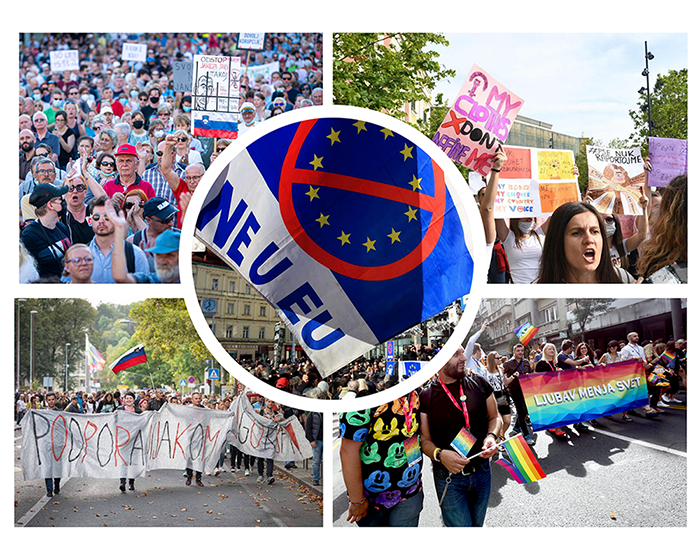 International Conference May 5-6, 2022, at the Université libre de Bruxelles (ULB)

Political Regime Developments in Southeast Europe:
challenges to stability and quests for change

After the turbulent 1990s and promising early 2000s, Southeast Europe (SEE) has gone through a various array of pol itical regime developments. Remarkably, the supposedly parallel processes of democratization, market liberalization and Europeanization have brought about mixed results over the last decade. Echoes from the region’s authoritarian experiences are all but a memory of the past. Some SEE countries have embarked upon autocratization, as witnessed in the cases of Serbia under Aleksandar Vučić since 2014, the secessionist attempts by Milorad Dodik in Bosnia’s Republika Srpska, and Turkey, hegemonized by Recep Tayyip Erdoğan. Similar troublesome tendencies – although of different magnitude – can be observed even in Slovenia, once the regional democratic frontrunner, under the premiership of self-styled Donald Trump admirer Janez Janša.

Yet, autocrats in SEE have not remained unchallenged. A plethora of domestic actors, ranging from the political opposition in Kosovo and North Macedonia, the Orthodox Church in Montenegro, anti-corruption agencies in Romania, the Speaker of Parliament in the case of Slovenia, as well as grassroot movements across the entire region, have stepped in and actively resisted autocratization. Some of these efforts proved to be successful in toppling autocratic leaders and led to a shift in power, such as in major cities in Bosnia and Herzegovina, and at the national level in Bulgaria, Montenegro and North Macedonia, ending the long domination of Boyko Borissov, Milo Đukanović and Nikola Gruevski.
Accordingly, imposing a unique and all-embracing paradigm – either democratization or autocratization – to account for all the political regime evolutions that have occurred in SEE over the last decade would excessively simplify the complexity of such developments. The cases of Bulgaria – holding its third legislative elections in 2021 in an attempt to produce a stable ruling majority – or of North Macedonia – where Zoran Zaev, who had posed as a symbol of a reformist pro-EU wave in SEE, in particular after the 2018 Prespa Agreement, has recently handed-in his resignation – highlight that complexity.

Indeed, despite democratic stagnation, the undermining of checks and balances and the attraction of support via ethnopopulism and clientelism in some cases, the ascendance of would-be authoritarian elites has happened during a phase of sustained economic growth and regime stability. Ultimately, regional autocrats have managed to present themselves as pragmatic leaders, capable of providing solutions to severe crises, such as refugee waves or the COVID-19 pandemic. The most significant example has been Vučić’s cooperation with the EU during the former and acquisition of vaccines from China and Russia during the latter.
This kind of political regime, termed as “stabilitocracy” by scholars dealing with the region, has provided autocratic-minded leaders in SEE with a high degree of external and internal legitimacy. Even EU institutions, traditionally portrayed as unquestioned democratizing actors, nowadays refrain from promptly condemning autocratic practices in SEE. Furthermore, they have sometimes legitimized autocrats and their parties by advancing the enlargement process even in the absence of tangible democratic reforms, in the quest of security at the European borders.

This conference will investigate the challenging variety of political regime developments that SEE has experienced since the 2010s. It shall serve the purpose of addressing not only different paths of democratization and autocratization, but also the plurality of multidimensional nuances and dynamic configurations related to regime developments, more generally. Quantitative or qualitative, comparative or single-case examinations will be equally welcomed. We aim therefore to explore new avenues of research and involve researchers working on different aspects of the components of political regimes in SEE, and the causes, effects or correlates thereof. Topics of interest include, but are not limited to:

We invite researchers, established as well as early-career scholars and practitioners, to engage with these issues. Please send a paper abstract (300-word max) and a short bio to: guido.panzano@ulb.be; venelin.bochev@ulb.be

The deadline for sending abstracts is January 31, 2022.

The outcome of the final selection will be emailed to the applicants by February 14, 2022.

The selection committee will value diversity and equality in the final selection (such as in relation to gender and origin). Conference papers will be due two weeks before the conference.
Please write to the abovementioned emails for further information.

As the conference will be a hybrid event, panelists will have the opportunity to attend the conference in person in Brussels or intervene remotely. More up-to-date information will be provided closer to the event.